Connecticut is truly one of the most fascinating and unique states in America, being home of the polaroid picture, hamburgers, the helicopter flight, and the first color television broadcast. It is a pioneer of some of the greatest inventions of the 20th century. But what has Connecticut turned its attention to in the 21st century? Staying clean. Staying clean isn’t a measly asset to have in 21st century America, there is a trash epidemic across the nation, bringing high CO2 levels, garbage on the streets and landfills filled. But how has Connecticut remained so clean?

Connecticut was voted one of the cleanest states in America, overtaking notoriously clean states such as Vermont and Colorado, the previous record holders in America, and even the World at one point. But why was it voted cleanest? Especially by people not from the state? It must have made a good impression on visitors.

How They Did It

Firstly, Connecticut’s clean air has been overseen by its own Department of Energy and Environmental Protection, which has campaigned massively for the use of clean, green sources of energy by putting up wind farms, geothermal, and hydropower energy. Also encouraging its population to use solar panels. In cities like Stanford, you can barely tell you’re in a densely populated city because of the clean air. There have been hugely successful attempts to keep natural woods and animal habitats protected, not cut down or polluted, keeping a unique, clean, and appealing wildlife and wood territory. Cleanliness isn’t just what a street looks like, it also includes keeping the natural ecology and landscape in shape, clean and allow natural wildlife to flourish and maintain a good standard of living for the animals. Connecticut has also massively overhauled its recycling system to stop the overuse of landfills, modernizing it allowing for more trash to be recycled and quicker and is littered with modern, easy to use trash collection companies. 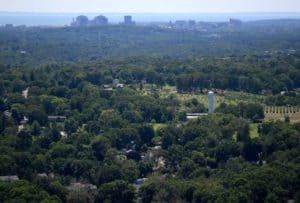 The state government can only do so much though and Connecticut’s cleanliness, more importantly, comes down to the attitudes of the people in Connecticut, with strong emphasis, advertised by the state government, to recycle, keep the streets clean by not littering, use solar panels when you can, respect wildlife and keep your homes clean. Connecticut’s outside might be clean, but a factor to take into consideration is the cleanliness of the typical Connecticut home. Connecticut residents are very house proud and keen to make a good impression on visitors from the state and wherever they come from. Albeit with emphasis on keeping wildlife sites clear of litter, much wildlife still ventures into gardens and homes, and some houses can get infected with pests such as rodents, ants, spiders, or even wasps. Of course, this is only natural. The best way for the typical Connecticut family to deal with these pests and the reason the state doesn’t have a pest epidemic is the use of family-run, local pest control companies, like yalepest.com, who keep records and form a personal relationship with their customers. Companies like this keep the typical family home in Connecticut clean, free of pests so the homes can be at their best, and when the odd adventurous wildlife critter, such as raccoons and opossums turn up for leftover scraps, they’ll deal with them safely and swiftly.

Connecticut was voted one of the cleanest states in America due to the attitudes of the state government and the people alike, as well as working alongside brilliant trash, energy and pest control companies that are local, creating a state spirit of cleanliness pride in the home, and out on the streets.

Four Airports Were Brought to a Standstill Due to Camera Drones

When I was younger I was presented with an idea of my future husband that I just couldn’t see myself pursuing. ‘You’ll have a nice strong man that will take care of you’ is what my mum would always say. I didn’t exactly want someone to be looking after me when I was an adult, […]

The US appeals court has been found to have paid out over a billion dollars in compensation to NFL players as a result of concussion and the brain damage it caused. From 2016 when these figures were produced, a preventative programme has been put it place to help avoid injury during games, and in fact […]